All the latest news from the automotive industry
Home Car News Auto Shows Bugatti celebrates the 100th Anniversary with the launch of Bugatti La Voiture...

Bugatti made its debut with the most expensive version of the supercar at the Geneva International Motor Show initially and then at Pebble Beach. The ‘Bugatti La Voiture Noire’ which costs around $18.68 million was introduced to celebrate the 100th anniversary of the brand.

The black car is a limited-edition drive and was developed as a tribute to the Founder’s son Jean. Among the four Type 57SC Atlantic coupes that he had developed in the 1930s, he named one of them as ‘La Voiture Noire.’ The black glossy supercar with its carbon-fiber chassis feels extremely light and comfortable on the roads.

The deputy designer, Etienne Salome while recalling Jean’s series of Atlantic coupes stated this elegant and timeless beauty as Jean’s creation. He compared it with a modern-day Bugatti that Jean would love to drive if he was alive.

The Design of La Voiture Noire:

The car combines comfort and luxury while demonstrating the abilities of a hyper sports car. This cutting-edge automobile exhibits highly-functional features and elegant bodywork. With a longer wheelbase than Chiron, the car delivers power and comfort to the drivers.

Further, it is powered by the quad-turbo 8-liter W-16 engine. From the roofline to the rear, the sleek and subtle look of Bugatti catches the eye of its admirers. The full-width shaped taillights and the six exhaust tailpipes provide justice to the brand image.

Looking at it up close, the black car which is reminiscent of Bugatti’s Atlantic- you will find the car to be quite stealthy with ultramodern properties and well-justified proportions. The beautiful rear of the car covers six exhaust pipes supported by diffusers and fins popping beneath the car.

The illuminated Bugatti text at the rear area looks magnificent and the chrome feature matches the design. The directional vanes direct airflow and provide efficiency on the roads.

The brand is well-recognized for providing an ultimate speed experience to the users. Bugatti’s La Voiture Noire is not just an ordinary car that is built around high-tech engineering concepts but it shows the true power of its rich history that is beyond any concept. With stunning large wheels and a carbon-fiber body, the concept car can offer a unique experience while being on the roads. 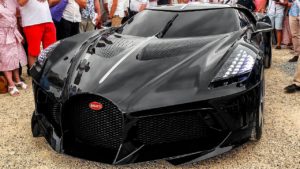 The world’s most expensive car, Bugatti La Voiture Noire is a tribute to Ettore Bugatti’s son, Jean Bugatti who was an automotive designer. The engineering and design team developed the concept keeping the perspective of a modern-day Bugatti in mind while aligning it with the classic Atlantic design built in the 90s by Jean himself.

With its unique elements and advanced capabilities, the car made a successful debut and gained the attention of several people. Although it’s a limited version in the brand’s production line, it still has managed to win a million hearts.