A vehicle with a tremendous horsepower that is also a globally viable production car. People were really excited about this car since it was hyped for quite a long time. The car was originally named Ragnarok in the press release but later on named Jesko, after Christian Von Koenigsegg’s (Founder & CEO) father’s name.

“You can go from the first gear to the ninth gear (YES THIS CAR HAS NINE GEARS) as long as you’re not burning the car down! “

This is how fast the car actually is! 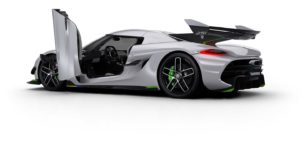 It has a strong horsepower of 1600 and 1100 lb-ft of torque with a 5.0-litre Twin-Turbo V8 gas engine and it is also environmentally friendly. The company has redesigned the entire transmission panel, given a whole new meaning to sports car.

The Twin-Turbo technology alongside with rear view driving and you can jump from gears, back and forth. You can go from the first gear to the ninth gear (YES THIS CAR HAS NINE GEARS) as long as you’re not burning the car down!

This allows the driver to switch RPM in split seconds and go as fast as he wants. 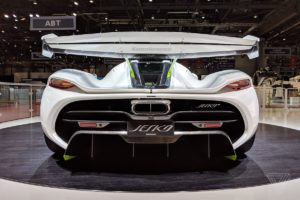 The vehicle’s engine runs on E85 which can switch tunes and run as low as 91 octane through a flex fuel sensor. This makes the car run on 1280 horsepower which is quite crazy.

However this car can transform into 1600 horsepower if it is driven on Ethanol fuel which you can get from the US base or some parts of Europe. This is insane, the car is insanely fast!

The vehicle also produces a better flow through the turbos and exhausts because a flat-plane crankshaft goes for a higher redline which evens out exhaust pulses.

The vehicle has very large turbochargers and that asks for a lot of exhaust gas. In order to get the turbochargers to spool up, the on-board pressurized air canister does the job when the exhaust pressure can’t do it alone.

The air also keeps getting refilled in the air canister. This process also very well works for heating up the catalytic converter which promotes good emission.

The Driver Side of The Jesko 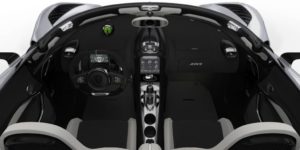 If we talk about the interior, it is exceptionally beautiful and all robotized to maximum. Yes the car might have autonomous modes in the future but right now it can all be controlled from a remote like the previous model.

You can control the doors and everything with this remote, open it, close it, control the volume and your seat adjustment, all by the help of this remote. 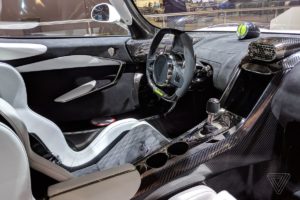 It also has a wireless charging for your phone with several different cup holders. And if you haven’t seen the glove compartment, you are about to be blown away.

The car is also convertible, however, they have screwed it in to give the car utmost power it needs to be the fastest.

So you can say without doubt that this car has got the best of all worlds. It has power, drivability, comfort and all the technical requirements concept cars have nowadays.