The Concept of ‘Icona’ car series was first revealed in 2018’s Paris Motor Show. The two-car concepts of the series made their debut as Ferrari’s Monza Sp1 and SP2. The iconic cars represented Ferrari’s rich history of magnificent cars.

The automobile leader, Ferrari has always managed to introduce visually-appealing cars with high aerodynamics to the world. This time it’s different as the Sp1 was launched to pay tribute to Ferrari’s rich cultural heritage of cars. It’s a special limited-edition that offers high-efficiency on the racing tracks to the drivers.

Ferrari Monza SP1 is a single-seat sports car with great aesthetic design and advanced technological components. With an 810 horsepower, V12 engine, and a total run of 499 units, the car is worth $1.85 million. The design of the car concept is elegant and smart.

The car has an elongated frontend with technology like 812. Further, it has aluminum chassis and a 7-speed dual-clutch gearbox. The 21-inch wheels still win the design of the car as they are larger than any of Ferrari’s past supercar models.

The Design of Ferrari Monza SP1:

Coming to the most evocative car concept, the new ‘Icona’ which means ‘icon’ is a brand new car series launched by the automakers of Ferrari. This special car demonstrates a timeless beauty and elegant style with its fully silver body and two yellow-striped lines. 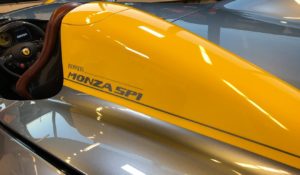 The styling elements of this car exhibits high-tech engineered concepts with great aesthetics. The interior is fascinating with a single=seat and a driver cockpit. The powerful V12 engine provides durability on the roads. 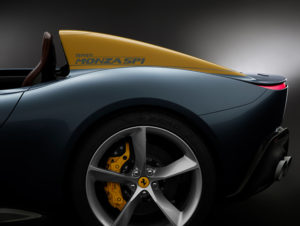 The gorgeous exterior combines elegance with innovation. The nostalgic elements define the glorious past of the brand at its finest. The carbon-fiber body with equal proportions and visible fine lines matches the design language.

A car that seems sculpted by the wind. It is the purity of the styling elements that impresses – an aesthetic that is futuristic but, at the same time, a respectful yet un-nostalgic homage to the past.

The sleek silhouette is robust floating toward the dynamic rear diffuser embracing the tail of the car. The whole bodywork looks like a typical 1950s Ferrari. Also, the car has no windshield. 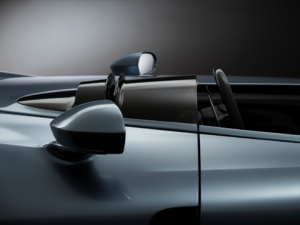 The interior architecture is subtle with the seating arrangements of an individual driver. There’s not enough space for modern conveniences but the car has proper features and control systems to assist drivers while driving.

The shocking and best part about this latest yet traditional car concept is that it comes with its accessories such as leather shoes and branded-helmet. The massive wheels and the light carbon-fiber body allow drivers to put on a big show while being on the roads. Not to mention, the ‘speed racer’ car is built for the tracks.

The engine in the Monza SP1 is derived directly from that of the 812 Superfast, with optimised fluid-dynamics in the intake ducts to deliver even higher performance.

Ferrari’s Monza Sp1 and Sp2 both are limited-editions and both have their own features and styling elements. This Sp1 has the potential to impress drivers who love to travel solo without any boundaries.

This sports car can deliver a world-class experience to the people since it signifies the rich heritage of Ferrari’s past production line. The creative design and distinct features justify the cost of the car which is around $1.8 million.