All the latest news from the automotive industry
Home Car News Concept Car by BMW Pays Tribute to The Original 3.0 CSL Race...

Unveiled for the first time at Pebble Beach in California on the occasion of the yearly automotive charitable event known as the Pebble Beach Concours d’Elegance in 2015, this BMW concept car had been developed to pay homage to the original 3.0 CSl, in honor of its 40th anniversary.

The 3.0 CSL also helped BMW establish their name in the automobile industry by winning numerous races.

However, this Hommage R did not race since it’s a concept car but it does have an engine that makes it drivable, but it can only be driven on private properties till it’s a fully developed car. Unlike most concept cars it also has an exhaust, a gearbox and it even includes a fire extinguisher system.

BMW has expressed their interest in making this car into an actual road-legal car if the right customer comes their way. They would either sell it as a one-off or only develop a few pieces depending upon the demand.

“All the details from the BMW 3.0 CSL are present in the Hommage model,” BMW design chief Karim Habib said in a statement. “And they are all there to be discovered in their original form. It’s a bow to the 1975 car.”

This two-door concept is undoubtedly one of the most good-looking concepts to have been developed by the brand. The brand’s admirers would sure love it if the brand evolved it into a fully functioning car. 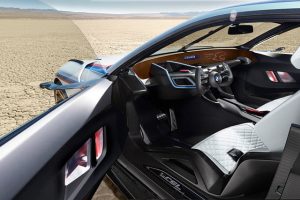 The car’s been built of lightweight materials such as carbon fiber. They have developed carbon fiber reinforced plastic for the development of the doors, cars and the lids of the car. The side mirrors have also been replaced with rear-view mirrors.

The designer of the car, Karim Habib has described the design of the car as a combination of the genes of a racing car and an elegant aesthetic that is appealing and can win the hearts of its fans.

Coming on the interior, there is an interior dash that is composed of a single piece of wood trim. There are other modern additions as well such as an infotainment center and an eBoost system as well.

It also includes bucket seats with six-point seat belts located in the cockpit. There is also a compartment for two helmets located at the rear and everything’s been cladded in dark accents to accentuate its flat silhouette 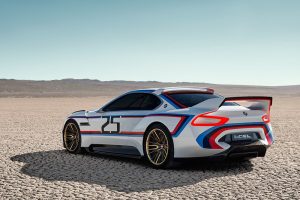 Although the new car doesn’t look exactly like the “batmobile” — as some have dubbed the original 3.0 CSL — the Hommage still manages to convey an imposing figure.

The car produces up to 500 horsepower. It has a straight-six engine. There are two turbocharges and also has the largest breaks that one could ask for.

This hommage serves as a nod back to the original CSL 3.0 which was back in the day, also dubbed as the “bat mobile”. If BMW ever decided to turn this potential best buyer into an actual functioning car, the fans will be over the moon.

However, what would be an actual threat for the fans is the idea that BMW transforms this very concept car into an actual one rather than developing a newer functioning car inspired by the concept.