All the latest news from the automotive industry
Home Car News Car 2030”: The One-Off, All Electric, Futuristic Car Unveiled At The Riyadh...

Crafted specifically for the Riyadh motor show, and unveiled at the said occasion in Janadriyah by the chairman of GEA and president of Riyadh Season, this Hulk of a car is called “Futuristic” for all the right reasons. Whether it is the stellar color combination or the dual electric engines or the unbelievably thick 22” wheels that could travel off-terrain makes it a supercar to die for.

This one of a kind car is the brainchild of automobile designers Giorgetto and Fabrizio Giugiaro, who also initially mastered the Maserati MC12. They have dedicated this high-functioning SUV to Saudi Arabia and further went on to say that it is designed to cater to the needs of this country at this particular moment in time.

RIYADH: The futuristic electric car known as Car 2030 was auctioned at the Riyadh Motor Show for SR3,204,500 ($854,489) on Saturday. … The black and green electric supercar is suitable for all roads, unlike other sports cars. Its roof and body are made of a mixture of aluminum, fiber and carbon.Nov 23, 2019

It operates on a full electric mode and has a whopping horsepower of 540 directed to all four wheels which catapult it into 60 mph in 3.5 seconds as quoted by GFG style. The range is 230 miles upwards and could reach the maximum mph of 125 which could be applied to any surface.

The roof of this car is made up of aluminum and fiberglass, whereas the body is manufactured from carbon and the interior consists of two seats and two doors. It is not a typical super-car and is considered part “Hyper SUV” and part super car on top. 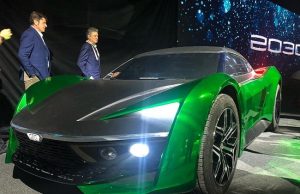 The 2030 super car is designed with keeping in mind the needs of this particular territory of Riyadh and is inspired by the desert itself. The design is an embodiment of sleekness and simple interior like that of the region and appears to entice its target audience with it’s over the top front and its well-adjusted rear.

Most super-cars have such winglets that when the driver is getting in the car, they have difficulty and try to maneuver their way in because of the roof positioned quite low but with the 2030, the roof is positioned at such a height, that getting in the car is not a problem to be reckoned with.

The driver of this off-road SUV would be contented with its capability to adhere to fast driving on a desert track. 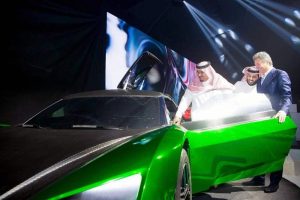 This magnificent innovation by the Italian based company GFG is not just a revolutionary step by bringing to life their off-road supercar but could serve as the basis of the idea where all supercars could be off-road cars as well.

This car is officially set to be unveiled at the Geneva International Motor Show 2020. Whereas, the first 2030 Car was sold for a stupendous amount of $854,489.

Suffice it is to say that the 2030 car was among the most highlighted cars of the first-ever motor show held in Riyadh and will strive for the same reputation at the Geneva Motor Show in 2020 as well.