This mid-engine sports car is manufactured in collaboration with Red Bull Racing. It’s meant to be included in the Valkyrie track-focused sports car and is developed to be used for everyday purposes.

The car had been initially named as the “Son of Valkyrie” at the time of its introduction because it included many features of the previous Valkyrie but later on, its name was changed to Valhalla.

The car is set to be featured in the upcoming James Bond movie, with three other Aston Martin cars. The car is predicted to be up for sale by the end of 2020. 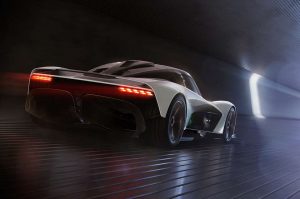 The design although it is quite similar to the Valkyrie but is comparatively more refined and sleeker in its looks and designs.

This hyper car does not have any side mirrors, instead, what this car has are cameras hidden underneath the metal sheet of the car that provide the view of the back. The most important part of this design is the FlexFoil rear wing. 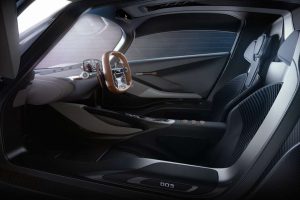 This wing enables the car’s down-force to be changed without having to change its angle of attack. The brand has also gone for printing 3d-headlights which are about 50 percent lighter in weight as compared to the actual Aston Martin headlights.

The interior of the car is quite simple and a lot more spacious than that of the Valkyrie’s and can accommodate more people. The infotainment has not been included in this car and instead there is a clasp for holding the cellphone of the driver which serves as a substitute for the infotainment system.

The seat also has a heart-rate monitor. There also aren’t any air vents or speaker grilles in this Valhalla. The car includes a steering wheel that is straight out of a racing car It also includes a center console and has space for storing luggage behind the wheels.

This hyper car will gain power from a twin-turbocharged V6 that will be linked hybrid-battery electric system. The car has been designed with the inclusion of formula-1 inputs. The car is said to weigh 2,976 lb.

The oil change system to be used by the engine of this will be that of the Castrol Nexcel 90-second, and it will also be the first road car to use a system like this. 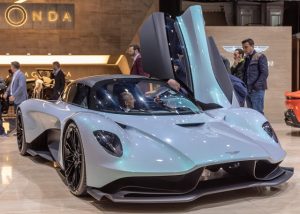 It is estimated to have a horsepower of 986hp. On top of the car is the exhaust system which uses dual outlets and is placed on the top.

The brand has decided to build only 500 pieces of Valhalla and each is going to have a starting price of $1.1 million.

The Valkyrie brand is set to reach for newer heights with this new Valhalla and has chosen the best way to convey this message to the public by featuring it in the revered James bond series.