All the latest news from the automotive industry
Home Car News The New Mercedes-Benz Vision AVTR Is a Car Straight Out Of an... 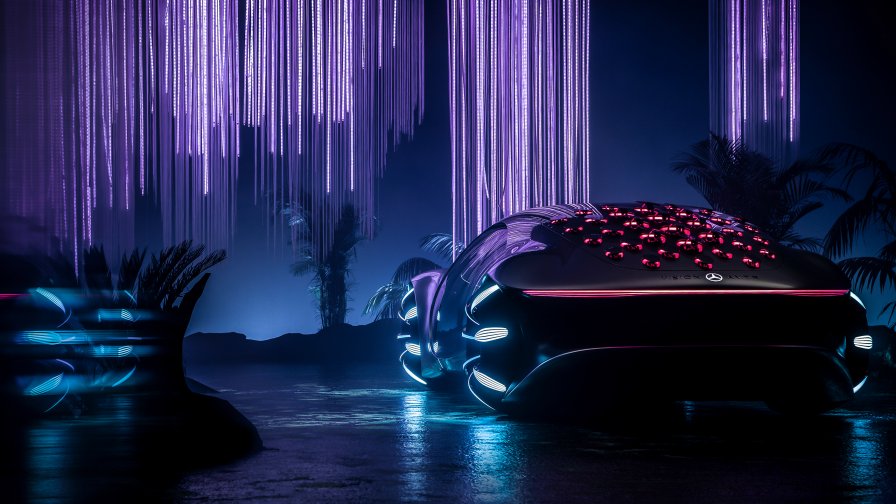 Unveiled at CES 2020, in Las Vegas, The Global Stage For Innovation, this new Mercedes Benz Vision AVTR concept car is a collaboration between Mercedes and Avatar movie director James Cameron to bring to life a concept car that is a blend of both technology and humanity as signified by the name “Advance Vehicle Transformation”.

The design of the car is inspired by the theme of the movie itself and showcases the interaction between the driver and their vehicle. This car, although one of its kind, is still like many other Mercedes Vision Concepts and is a dream come true because of what it represents for the future of automobiles.

The design of this car is inclined towards manifesting the physical attributes of a creature or a being other than just an automobile. It aims to provide an insight as to what it will be like to ride in a car of the future.

The car contains an oval-shaped controller in place of a steering wheel. The hand, once placed on the controller vibrates with the seats along with the pace of your heartbeat. The car can be driven sideways as well as diagonally. It can also easily be controlled by gestures.

The rear end of the car is covered in scales or “bionic flaps” 33 of them to be precise, as stated by Mercedes. These flaps face down and emit a blue light while being driven and when the driver hits the brake the lights turn red and the flaps go against the airflow as to act as an air-brake. Other times the flaps move in the direction the vehicle is going along.

On top of all this, the entire interior of the car is made of non-animal products such as recycled plastics and vegan leather. The brand has also mentioned that the spherical wheels of the car will also not react harshly on the forest floors.

The AVTR can detect when other occupants such as your family are present in the car and adopts the speed accordingly. There is also a screen located on the dashboard from which the passengers at the back can be observed easily without having to turn around.

“With a capacity of around 110 kWh, the VISION AVTR enables an electric range of more than 700 KILOMETERS. By recuperating during roll-out and braking, the high-voltage battery can be recharged with a higher efficiency than established systems while driving and thus contributes to the high energy efficiency of the overall system.”

Also, if you have your children with you at the back and they won’t stop pestering your driving than worry not because there are very cool features that will entertain your child throughout the ride that includes learning-based gaming, virtual reality experiences and much more.

The features of this new concept car, however unique they may be, it is still nearly impossible to expect the brand to incorporate all these features into an actual functioning car but the brand will include all the necessary features that define the whole concept of the car which is to blend both humanity and technology to form a creature of this excellence.

The display screen is digital and gives comfort features like Car play, Android Auto and Climate Control although the battery range and driving range are highly compatible.