The Outrageous Bugatti Vision GT is a thrilling addition to the Vision GT garage. The Automakers of Vision GT designed the car concept for a video game franchise called Gran Turismo, further explained that they wanted to keep the car as real as possible even in the virtual world. The functions and characteristics of the car integrated with engineering represent a combination of bold and visually-appealing aesthetics. 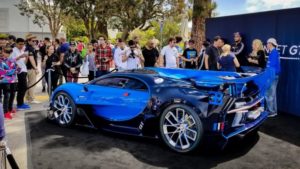 Providing a brief about the Vision ‘Gran Turismo’ project, it’s a platform that enables real-world car engineers and designers to exhibit ground-breaking car concepts in a virtual world. The results are submitted on Gran Turismo 6 on Play station 3 after which it can be enjoyed by other gamers from different parts of the world. Several brands have already joined forces with Gran Turismo 6 and demonstrated one of the best works while some of the concepts have been applied in the real world too.

“The Bugatti Vision Gran Turismo is the ultimate race car, and at the same time a true Bugatti.”

Coming to Bugatti, the show car was revealed as a full-size in 2015 with W-16 engine, 8-liter with around 1500 HP. Recently, it has been updated with a new engine. This Bugatti is wild and nothing close to being fancy. It has been designed to keep it real and rough on the roads and to create an adventurous experience for the single driver with no passenger seat at all. The blue paint and the driving dynamics are similar to the Type 57 that won the Le Mans in both 1937 and 1939. This car comes with all the safety systems and road comforts so the drivers can race a lighter and faster car. 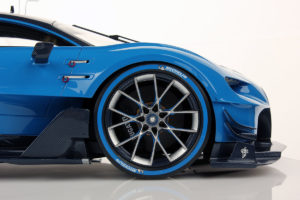 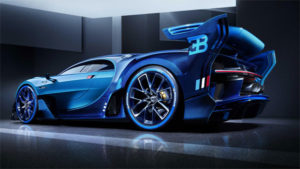 The Bugatti Vision GT is a four-wheel drive with impressive looks and addicting features that delivers an eye-catching treat to the audiences. The car is capable of speeding almost over 250mph.  Each part of this beauty has a purpose for creating an on-going road experience. The eight-eye headlights represent style and uniqueness at once. The doors are integrated with safety door latches that allow maximum security to the drivers on the tracks. If faced by a difficult situation, the driver pulls them up and the whole door comes off. The GT body is built with carbon-fiber which makes it lighter in weight and heavier on tracks. 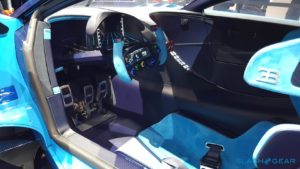 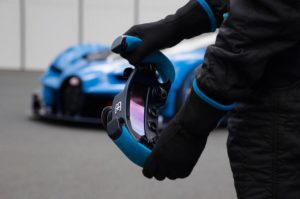 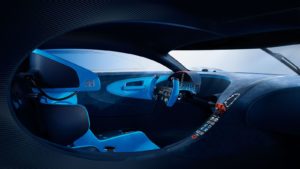 The inside of Bugatti is all real and defines ‘class’ in a dynamic environment. There’s no room for passengers inside as the one-seat car option is available to drivers on tracks only. Over the steering column, are three cameras, one on the left, one on the right and one on the rear but all three of them are linked with a panoramic view. The fully cut-off steering wheel is well-crafted and distinctive.

The Grand GT provides the world’s fastest and powerful driving experience aligning with the other GT cars. It provides a detailed outlook about what’s more to come in the future.

The Vision GT has developed more room for high-tech engineered cars in the future. It’s nothing extreme in the GT world but it’s still incredible and vigorous for the racing world.