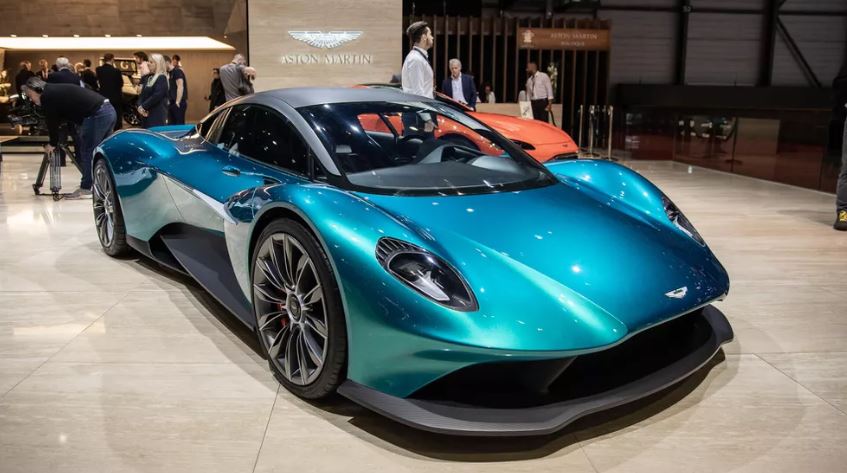 The main thing that grabs a person’s attention when they come across this car is the great aluminium structure and body. It gives the car a very sleek and minimalistic look that is feels very chic. This is not going to sharing the carbon tub like the Valkyrie or 003 which will be the reason of the drastically different prices between this 003 and Valkyrie. It will be sharing the V6 engine from 003 albeit in a slightly different tune.

Miles Nurnberger, Aston Martin director of design said that this car has more of a seductive and less technical appearance than the Martin Valkyrie and the AMR. In contrast to the 003 where the wing mirrors have been integrated into the bodywork the Vanquish mirrors more conventionally housed so they are acting as wing mirrors which makes it so futuristic. Instead of using glass mirrors there are now screens housed with inside the car in order to see the roads.

On the back of the car there is a huge diffuser that is taken from the 003. Also, instead of using the carbon construction the Vanquish is using bonded aluminum chassis which is more akin to the construction the AM is using in its current road cars.

But it is very important to know that whatever knowledge and information the Aston Matin gets from the Valkyrie and the 003 can be used to make change and improvements in the Vanquish. This can be very beneficial for the brand as it can make betterment from the reviews the others get from the drivers and customers.

The lights are the same as 003 and Valkyrie but interestingly enough, the positioning of the exhausts have been changed from the top of the engine bay to a more conventional placement, in the rear bumper.

It has a very distinctive clam-shell front fender with opening so you can see through onto the tires which is a very race-car-esque. There are fewer open spaces where you can see around the tub and openings where the arrow flows through it.

“ Vanquish S provides the widest ever choice for exquisite interior finishes. Carbon fiber. Contrasting seat accent colors. Unique hour-glass stitching. A million stitches go into every one, along with over 100 years of history.

This is a more conventional road going supercars but none the less the idea is for this to be the prettier car so it has been designed to thrive in a less extreme performance environment but still holding its own on the track even though it is a road bias car.

So, as we have seen with the Valkyrie and what we will see with the 003, Vanquish concept will also be going through a rigorous development process as it near its production specification. By the time this car hits the road there will be quite some learning about the V6 hybrid and it is going to be very well refined.